" Who are our neighbours?" 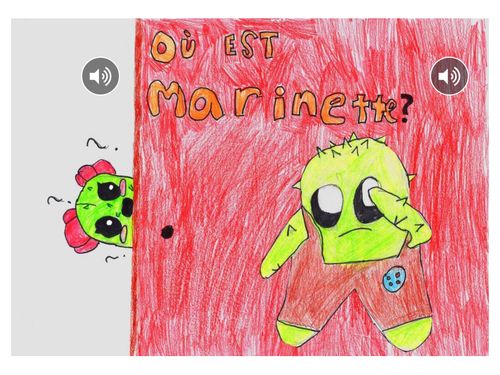 Kamishibaï literally means « paper-play » in Japanese 紙芝居. It is a storytelling technique that comes from Japan. Street storytellers would perform in front of children with the support of illustrations displayed through a wooden frame (butai).

Each image reproduces an episode of the story while the corresponding text can be read at the back of the frame.

Multilingual kamishibai implies telling a story in a fun and captivating way. It is also a powerful tool for teachers to help children learn to read, write, express themselves with words and through the arts… while opening them up to languages at the same time!

At least four languages integrate the story or the illustrations. Multilingual texts reflect the diversity of languages spoken by numerous pupils who come from the local area as well as beyond.

Creating a kamishibai using several languages leads to a reflection on the language of instruction at school, which remains the main language of the story. It is also a great way to allow other languages spoken by children, families or educators within school.

Do you have a question?